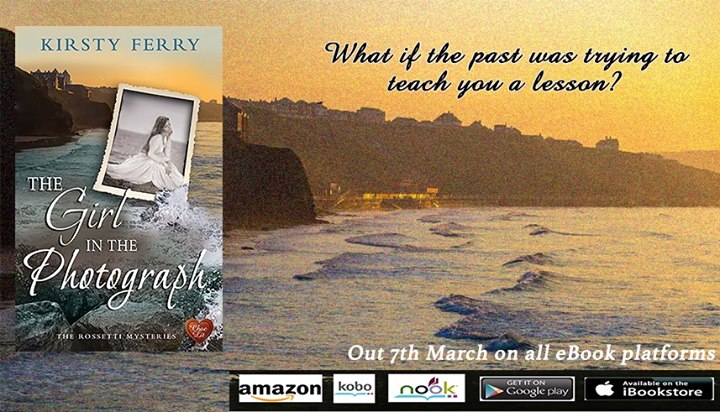 Welcome, Kirsty Ferry! Kirsty’s here to tell us a little bit about her brand new book, The Girl in the Photograph. Don’t you just adore that gorgeous Choc Lit cover?

You can a tantalising extract from chapter three here. Take it away, Kirsty!

Hi Sheryl, thank you so much for letting me post an extract of my new book, The Girl in the Photograph, on your blog! This is the start of chapter three. As you can see, Lissy has been unsettled by her ex-boyfriend, the delectable Italian photographer Stefano, turning up and invading her holiday on the North Yorkshire coast near Whitby. Lissy is actually staying near Staithes, which is where a very famous art colony existed at the end of the nineteenth century. Staithes also has links to the hugely talented Laura and Harold Knight, who were members of the Newlyn Art Colony, down in Cornwall. Both areas are still a magnet for artists. And Lissy, my heroine, has a degree in Art History and, as you can see, connections to both these places. Add in a couple of forbidden Edwardian lovers, a jealous husband and a ruined mansion, and you’ve got the ingredients for my new timeslip novel, The Girl in the Photograph – part three of the Rossetti Mysteries series. I hope you enjoy it, and thanks again Sheryl xxx

How could Jon have invited Stefano Ricci to Whitby? Lissy just couldn’t believe it.

He knew how she felt about Stefano; how over the last seven years she had carefully constructed a barrier to keep him out of her life. He was well aware of what had gone on, both during her relationship with Stefano and even what had happened before that.

It was quite clear to her now that Jon had planned this, from the very first moment he decided to do that stupid project. He’d said he knew the right man to contact, the right man to help him out. But not for one moment had Lissy thought her brother would contact Stefano, of all people.

And to make matters worse, while they were all still in that studio, Jon had suddenly had one of his so-called brilliant ideas. ‘Who’s up for a wander down to the beach?’ he asked. The evening was warm and sunny, and even with the sea breeze blowing gently in from the coast, the town was golden and inviting. ‘We’ll dig holes and build sandcastles.’ This, obviously, to the child.

‘Me me me!’ Grace shrieked.

‘That sounds lovely.’ There was a note of amusement in Becky’s voice. Lissy opened her eyes and glared at her best friend; her childhood friend, no less, who had eventually married her brother.

Becky smiled innocently at her. ‘Doesn’t it sound lovely, Lissy?’

‘No,’ replied Lissy. ‘Why would I want to go down there amongst all those horrible seagulls and nasty sand? It’ll get in my sandals.’

‘Sand and sandals, the perfect match,’ said Stefano. He had taken up residence by the open door, dragging a chair across the studio and sitting there all lean and long-legged; clearly intending to block her way and, as a bonus, letting the summer air circulate around his bare feet. Those bloody bare feet. The last time she’d seen them, it had been a different summer evening and a different coastal town: Newlyn, in Cornwall.

The pebbly beach hadn’t bothered Stefano. He’d stood there and watched her walk away – well, hobble and slip away as she teetered across the little stones, cursing at him loudly over her shoulder. He hadn’t come after her; and she didn’t know if that was what rankled the most.

But he had this horrible habit of kicking his shoes off whenever he was near water or beaches or even fresh air, it seemed. At first it had been endearing. She loved the idea of walking barefoot with him along a sandy beach under the moonlight. But it had never become a reality – and to this day, she despised bare feet on the beach. And the thought of going to Whitby beach. With him. And his sodding feet.

The Girl in the Photograph

What if the past was trying to teach you a lesson?

Staying alone in the shadow of an abandoned manor house in Yorkshire would be madness to some, but art enthusiast Lissy de Luca can’t wait. Lissy has her reasons for seeking isolation, and she wants to study the Staithes Group – an artists’ commune active at the turn of the twentieth century.

Lissy is fascinated by the imposing Sea Scarr Hall – but the deeper she delves, the stranger things get. A lonely figure patrols the cove at night, whilst a hidden painting leads to a chilling realisation. And then there’s the photograph of the girl; so beautiful she could be a mermaid … and so familiar.

As Lissy further immerses herself, she comes to an eerie conclusion: The occupants of Sea Scarr Hall are long gone, but they have a message for her – and they’re going to make sure she gets it. 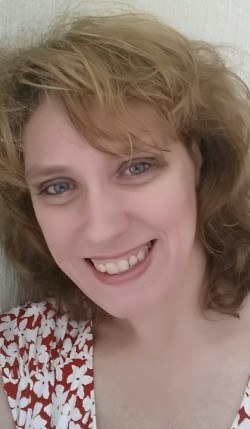 Kirsty is from the North East of England and won the English Heritage/Belsay Hall National Creative Writing competition in 2009 with the ghostly tale ‘Enchantment’.

Her timeslip novel, ‘Some Veil Did Fall’, a paranormal romance set in Whitby, was published by Choc Lit in Autumn 2014. This was followed by another Choc Lit timeslip, ‘The Girl in the Painting’ in February 2016 and ‘The Girl in the Photograph’ in March 2017. The experience of signing ‘Some Veil Did Fall’ in a quirky bookshop in the midst of Goth Weekend in Whitby, dressed as a recently undead person was one of the highlights of her writing career so far!

Kirsty’s day-job involves sharing a Georgian building with an eclectic collection of ghosts – which can sometimes prove rather interesting.