#Review WHAT SHE DID by @CKovachAuthor. Superb plotting. Brilliantly twisty #PsychologicalThriller @bookouture 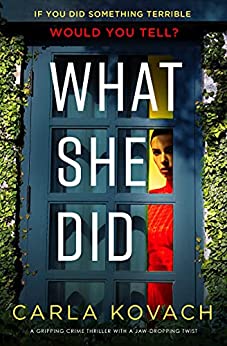 What She Did by Carla Kovach
My rating: 5 of 5 stars

Wow! That was one powerful read. What She Did promises you ‘a twisty crime thriller that will keep you up all night’. Finding myself thinking about the characters in the wee hours, visualising them and examining their motives for murder, I think it’s safe to say the book delivered. Marissa is damaged. Having witnessed the murder of her mother at just five years old, only to end up in the care of her aunt and uncle and abused in the worst possible way, how could she not be? A note here to say how sensitively that subject is handled. A sign of a good writer is that she knows she can trust her readers to get the picture without providing the graphics. The overriding damage is to her self-esteem and her ability to trust in people enough to share her vulnerabilities. She imagines she will be judged. You can easily identify with why she would feel that way, understanding that she would find it difficult to forge friendships – that kind of damage goes right to the core, after all. She’s likeable, with a strength of character she doesn’t realise she has. Her reason for not revealing the physical and emotional suffering she endured just makes you want to hug the child who was growing then into an uncertain teenager. She does find a way out – the incident around her fleeing the clutches of her vile uncle is fundamental to the plot so I’m not revealing. Her belief in herself is rocked further when she finds herself cruelly robbed of those few real friends she’s been able to make. I loved Reggie, another woman damaged by her formative years, who copes by being flamboyant and larger than life. I felt Marissa’s pain at her loss and again understood the processing of her emotions.

Years later, Marissa has achieved all she wanted. She has a safe place to call her own, albeit a temporary place while she works hard to achieve her dream of owning the little cottage where, as a toddler, she made brief fond memories with her mother. She has a good job, thanks to her caring friend, helping her to achieve her goals on the work front. Her ghosts still haunt her, but she has a future. And then her life begins to crumble. She is losing sight of her dream, the cottage, which her vile uncle has moved into. She thinks she is losing her mind when a neighbour, a drunken party animal and openly aggressive towards her, moves into the flat opposite; when a man she felt attracted to and is contracted to work for turns out to be a manipulative wifebeater. Even her childhood case social worker reappears in her life

When her uncle and the obnoxious neighbour are murdered, the obvious link to both is Marissa. She believes she didn’t do it. Even knowing she’s been sleepwalking – she assumes due to drinking alcohol which she can’t handle, she believes it wasn’t her. We believe that she believes it wasn’t, that she is being honest. We understand why she would wonder whether she’s being paranoid, why she would think someone is out to get her, but do we believe it really wasn’t her? Who is it who’s stalking her? The only person she feels she could talk to is Glen, the organiser of the residents association, but he’s been so kind to her. She doesn’t want to sour that tentative relationship too.

The story is packed with delicious red herrings and superb twists, hence my trying to analyse the characters in the dark hours. The final twist is masterful. A cleverly written and well plotted story, What She Did is a book I would highly recommend.

View all my reviews