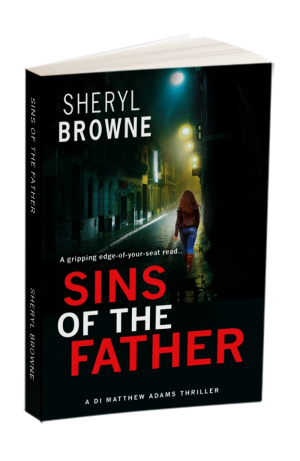 “…for God’s sake, man, she was strangled with your tie.”

‘A gripping thriller guaranteed to keep you on the edge of your seat!’
Former Police DCI Stuart Gibbon – GIB Consultancy

‘Another gritty thriller by Sheryl Browne, I thought ‘After She’s Gone’ was fantastic but this blew me away. DI Adams will walk over hot coals for his family.’

‘Great series really enjoying D I Adams. If you want a nail biting read, you must get this series, could not read them fast enough.

SINS OF THE FATHER

What if you’d been accused of one of the worst crimes imaginable?

Detective Inspector Matthew Adams is slowly picking up the pieces from a case that nearly cost him the lives of his entire family and his own sanity too. On the surface, he seems to be moving on, but he drinks to forget – and when he closes his eyes, the nightmares still come.

But the past is the past – or is it? Because the evil Patrick Sullivan might be out of the picture, but there’s somebody who is just as intent on making Matthew’s life hell, and they’re doing it in the cruellest way possible.

When Matthew finds himself accused of a horrific and violent crime, will his family stand by him? And will he even be around to help when his new enemy goes after them as well?

“There’s DNA all over the body, Matthew! Fibres, your skin under her nails, scratches all over you. For God’s sake, man, she was strangled with your tie.”